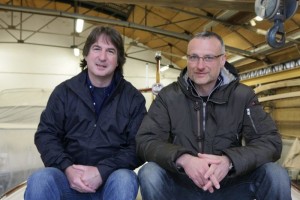 LEvi and VIlla, or Martin Levi and Antonello Villa, are the people who founded the Levi Boat Company in 2000. They share a passion for the sea and for boats ‘designed starting from the hull’ or in other words, with outstanding sailing qualities.
Add the eternal charm of the ‘classic’ lines of the 1960s and ’70s and you have our boats. The first dream that we made into a reality was the Corsair, a boat designed in the early 1960s by Sonny Levi and manufactured in England by Viking Marine.
Even then it was a fiberglass boat, powered by a pair of Volvo Acquamatic engines. We succeeded in the feat of producing a faithful replica in limited edition, embellished and updated according to the latest standards, at an affordable price.
It was anything but easy but the enthusiasm of our customers has amply repaid us!

Nowadays Antonello Villa, in cooperation with Gilberto Crosera and his shipyard, carries on building new boats with the same passion and inspiration. 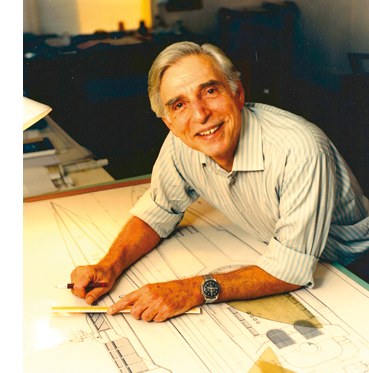 Born in Karachi 85 years ago, Sonny Levi was at school in Cannes when the war broke out.
His father, an interior designer and manufacturer, and an enthusiastic motor yachtsman, moved into Government contract boatbuilding at a shipyard in Boambay. From this early age the young Renato (‘Sonny’ was bestowed by an ayah who could not manage the letter ‘r’) designed boats, inspired by the multitude of local craft in that seafront city.
He joined the RAF and trained in England, studied aircraft design and demobilisation and returned to Boambay, where by 1950 he was chief designer in his father’s busy drawing office. In 1960 he moved to Italy to work for Navaltecnica in Anzio. “I have been very fortunate to have clients who are prepared to take risks” he says today.

“I always tried to be as honest with them as I could when we discussed their projects. And occasionally something didn’t work. This is the problem with original design.”
But for every failure there were a great many ground-breaking successes, and it seems typical of the man to ascribe these to luck and pass on credit to his customers – even if they were signing the cheques.
But when you look at some of the projects he involved them in you begin to see what he means: so many of the designs were at the cutting edge of naval architecture, where success was by no means certain. Like an artist with wealthy patrons, whenever he had an idea for a new work he could usually find someone to pay for it.

Rich playboy powerboat racers would find themselves enthusiastically funding outlandish and dramatic experimental prototypes. Commercial boatyards would be talked into daring new engineering solution on the promise of more speed and efficiency. If Sonny Lei is a problem solver at heart, he is one who has never seemed inclined to solve the same problem twice.

This website uses cookies to improve your experience while you navigate through the website. Out of these, the cookies that are categorized as necessary are stored on your browser as they are essential for the working of basic functionalities of the website. We also use third-party cookies that help us analyze and understand how you use this website. These cookies will be stored in your browser only with your consent. You also have the option to opt-out of these cookies. But opting out of some of these cookies may affect your browsing experience.
Necessary Always Enabled
Necessary cookies are absolutely essential for the website to function properly. This category only includes cookies that ensures basic functionalities and security features of the website. These cookies do not store any personal information.
Functional
Functional cookies help to perform certain functionalities like sharing the content of the website on social media platforms, collect feedbacks, and other third-party features.
Performance
Performance cookies are used to understand and analyze the key performance indexes of the website which helps in delivering a better user experience for the visitors.
Analytics
Analytical cookies are used to understand how visitors interact with the website. These cookies help provide information on metrics the number of visitors, bounce rate, traffic source, etc.
Advertisement
Advertisement cookies are used to provide visitors with relevant ads and marketing campaigns. These cookies track visitors across websites and collect information to provide customized ads.
Others
Other uncategorized cookies are those that are being analyzed and have not been classified into a category as yet.
SAVE & ACCEPT